Construction of the A 61 near Venlo

145,000 tonnes of granova® quality in the subgrade: an economical and technical success for the construction project between Venlo and the Kaldenkirchen junction of the A 61 motorway.

In the asphalt section of approx. 3 km in length, five structures were planned for underpasses and an access road/exit. The particular challenge of this project was the extremely high material volume needed for the earthworks along the planned route. 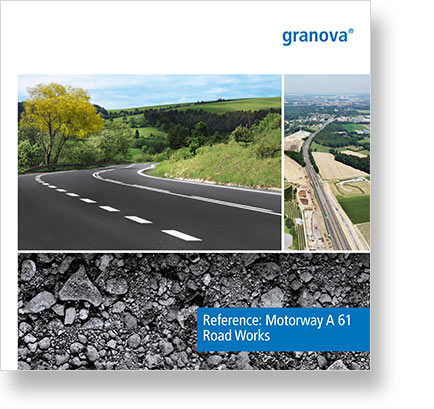 Learn more about this reference here

However, the construction project was also suitable for the use of substitute building materials. The decisive factor was mainly the fact, that the project location is located outside a water conservation area. Furthermore, the asphalt construction method makes it suitable for use under water-impermeable surface course. The required minimum distance of one metre between the formation and the highest groundwater level was ensured, as was a minimum distance of half a metre from buildings susceptible to corrosion. Thus, all requirements for the use of secondary aggregates were met.

As part of the tendering process, an additional bid was submitted that suggested the use of incinerator bottom ash in the road subgrade instead of the required primary building materials. This led to a considerable reduction of construction costs, which convinced the client.

In the course of the project, a total of 250,000 tonnes of incinerator bottom ash aggregates (IBAA) of material class HMVA II were installed in the road over a period of 6 months. At peak times, up to 6,000 tonnes per day were delivered by a consortium. MAV Krefeld GmbH supplied 145,000 tonnes of IBAA in granova® quality from its plants in Krefeld and Erftstadt. After a record construction time of one year, the section was put into operation.

The project is a good example of the advantages of IBA usage when the required environmental conditions of the project location are met. A quarter of a million tonnes of natural resources were conserved in this case and the economic benefits were significant – for the building contractor and the public client, and thus also the taxpayer.